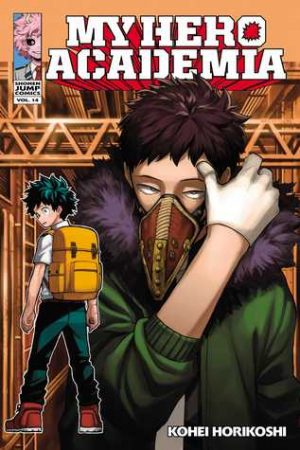 
Here we are. August has just begun which means another volume of My Hero Academia has just been released. Here we have the conclusion to the Licensing Exam Arc and the beginning of a new one. So settle in, grab some popcorn, and let’s delve into My Hero Academia Volume 14 by Kohei Horikoshi.

As with any long series, I can’t guarantee that this review will be completely devoid of spoilers. So do be warned before reading on.

If you’re interested in my thoughts of previous volumes you can check out the reviews of volume 10, volume 11, volume 12, volume 13, and My Hero Academia: Vigilantes Vol 1.

Volume 14 picks up right were the last left off. Midoriya and Bakugo have left the dorms the night after their hero licensing exams and have begun fighting. A lot of things happen in this volume. We see the conclusion of the Midoriya and Bakugo’s second fight, a new group of villains is on the move, we meet U.A.’s top three students, and work-study programs are starting up for class 1-A.

While the entire volume is filled with interesting and important things, nothing is as meaningful, perhaps, as the opening chapters. Bakugo and Midoriya’s fight is very important to both character’s development as people and as heroes, as well as their relationship. For the first time since they were toddlers they’ve talked (and fought) it out on equal terms. Despite being in the middle of a rather vicious fight, both stated exactly what they thought and how they felt about each other. We see Bakugo admit his fears and insecurities, something that has previously been hidden behind a screen of anger and explosive (no pun intended) behavior. On the same token we see Midoriya explain why he always followed Bakugo around despite Bakugo’s attitude and actions.

The art in this section is wonderful, as the fight scenes this series generally are. The panels are placed in a pattern that is slightly more reminiscent of American comics as opposed to other shonen jump titles, something I’ve noted in past volumes. Midoriya’s foot bursts out of a panel to kicking at Bakugo in a panel below him (or seeming to). I love seeing the fight scenes and this one was not only important in a narrative sense, but extremely fun to watch unfold in its own right.

Themes explored in the last volume are continued in this one. The stark contrast between the outcome of exams versus experiences out in the field is again brought into question. This time it’s talked about in a much more direct manner by the characters. Mirio, the top student at U.A., admits to class 1-A that real experience does more than school ever could. In order to gain more real world experience the students must begin work-study programs with established hero agencies. In order to gain access to these, students must use relationships cultivated by being scouted in the sports festival. On the other hand none of the top three students at U.A. did well at the previous year’s sports festival despite being widely recognized as some of the best heroes of the day, even counting already ranked pro-heroes. Moreover, it’s stated by the principle himself that Mirio is only mediocre at schoolwork. This is an interesting ongoing conversation on the need for schooling, for doing well in tests and rankings, and being able to hold one’s own out in the real world versus being recognized for skills that can’t be fully quantified by things like scoring and testing.

Another theme we see talked about is how exactly the students of class 1-A and 1-B should be treated. With everything that has occurred there is a fear in public and at U.A. of the students not being properly safe from villainy. This back and forth on what U.A. should and shouldn’t allow is spoken about fairly openly here. Some are vehemently against the idea of work-study programs for the first years. Others are for it. These teachers openly state their opinions, though largely in the background of other scenes. Though we’ve seen these arguments between U.A. and the press as well as U.A. and the general public, it’s interesting to see the internal dialogue at U.A. No one has the correct answer, and it’s doubtful that there truly is one. It’s as All Might states to Bakugo – All Might believes in his strength and abilities as a hero, but he might have forgotten that he’s still just a kid. There is a fine line here between being overprotective and allowing students to experience the real world for themselves. This line exists for all teenagers, but is especially those training to be heroes, a job which will put them in constant danger for the rest of their career (and possibly into retirement).

I really loved section with a new villain named Overhaul meeting with the League of Villains. We haven’t seen very much of our favorite villains since Bakugo’s rescue, and it was high time we saw what they were up to. The scene was tense with some great dialogue and fighting. There is a distinct parallel here between Shigaraki and Midoriya. Shigaraki is the successor to all organized villainy. He has a goal, a purpose, but seems to have very little in the way of a master plan to actually getting there. Midoriya is much the same. He has a purpose, a place he must reach, but doesn’t have an overall goal to get there besides working hard and learning more. Overhaul brings this lack of a solid plan to light and disrupts things greatly. I am very interested in seeing more of this new villain in the future.

I am intrigued by the newest pro hero we’re introduced to, Sir Nighteye. This is All Might’s prior sidekick, a person who seems to know all about One for All, and who doesn’t seem to like Midoriya at all. This is quite a different perspective than what we’re used to. Even those who have underestimated Midoriya or haven’t taken in very seriously haven’t openly rejected him in quite the way that Sire Nighteye has. I always like seeing the very human sides of the pro heroes and this series consistently highlights it’s heroes flaws whether it’s All Might’s lack of proper guidance and teaching ability or Endevour’s abusive behavior towards his family. Despite being All Might’s sidekick, having his own agency, and working on a case involving the League of Heroes, he doesn’t seem to have very pure motives. At least, not in regards to Midoriya. What will happen with the can of worms opened here? Well, we shall see in volume 15, which is set for an October release.

Throughout this volume we have several fight scenes, all of which are wonderfully drawn. Three of these all highlight one very important thing – the characters we see the most of being completely out of their depth. These are not easy fights for any of them. Losses and draws are more frequent than wins, and there is a real learning curve that everyone must undertake.

My Hero Academia is a series that only gets better volume after volume. This one is certainly no exception. I highly recommend picking up a copy of My Hero Academia Volume 14 by Kohei Horikoshi. I will certainly be continuing with this series, and eagerly await the release of volume 15.