Review – Overlord, Vol 5: The Men of the Kingdom Part 1 by Kugane Maruyama 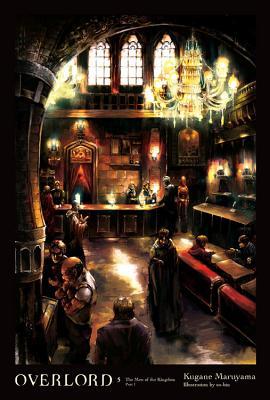 
Well, here we are with another volume of Overlord. This light novel series has gone interesting places, and I’m always pleasantly surprised by what happens next. Overlord, Volume 5: The Men of the Kingdom Part 1 by Kugane Maruyama is the start to an interesting new arc in the series focusing more on Sebas and several human characters.

If you would like to catch up on the series you can check out our reviews for Overlord Volume 1, Volume 2, Volume 3, and Volume 4.

Overlord Vol 5: The Men of the Kingdom Part 1 is the first part of a two part arc in the Overlord series. This volume continues where volume 4 left off. In Re-Estize the criminal underworld is run by the Eight Fingers. Ainz has ordered Sebas to see what he can learn about the organization. His path crosses with Climb, a young soldier and retainer to the Golden Princess, and Brain Unglaus, who has lost all faith in his abilities after crossing paths with Shalltear Bloodfallen.

Ainz doesn’t feature in this volume almost at all. Instead, the focus is placed on Sebas, Brain Unglaus, and a young knight named Climb. The first half of the book introduces Climb, the city, the politics of the capital city and its seedy underbelly. The pacing is a bit slower than previous volumes. This is most apparent within the first half of the novel which introduces several new characters, a new city landscape, and the inner workings of human world politics. While interesting, a few of these scenes did carry on just a little too long. Climb felt like a fly on the wall for pages on end at the start of this volume. Whatever agency he seemingly lacked was played upon throughout the rest of the novel. His strength and courage might not be flaunted in the opening pages as certain other character’s were, but Climb does come into his own as the story continues. The more time spent with him the more fascinating he becomes. Climb’s background was interesting, shedding more light onto his personality.

The first half does, of course, have fantastic moments in its own right. We catch up with Brain Unglas and Gazef Stronoff, two men who have had very different experiences with the inhabitants of Nazarick. Brain is a broken man after his encounter with Shalltear. He is brought to the absolute lowest point we’ve seen him so far, utterly terrified of Shalltear and her power while no longer trusting his own abilities.

The most interesting character within the volume was Sebas, who shares the spotlight along with the newly introduced young knight. While he was always one of the more fascinating denizens of the Tomb of Nazarick, he really shines in this volume. Sebas has a softer side, a more human side, than the vast majority of his fellows, something he shared with his original creator. He has more obvious agency than many of the others, truly thinking for himself and making his own decisions rather than the obsessive focus of doing Ainz’s bidding the majority of the other character’s show. This is due, largely, to his original creator being the one who founded the guild. That player’s kindness and urge to help is something that was passed onto Sebas.

Of course, this sort of behavior isn’t something the others understand or agree with despite Ainz’s own attempts at conveying the need for his subjects to make their own decisions and voice their own needs and opinions. Sebas is at odds with himself, trying to balance the needs of Nazarick and Ainz’s wishes while following his own morals and desires. Contention between Sebas and others grows throughout the volume, and he quickly became the character I was most invested in. I have always likes Sebas, but here he became a character very easy to understand and empathize with.

Overlord Vol. 5 takes the more serious tone of volume 4 and ramps it even higher. The tropes and fan service are not at all apparent here. In fact, there are few lighthearted, comedic moments at all. There is no intermission chapter as there were in previous light novels. We see a much darker side of this world than in previous volumes, which is saying something considering our main characters are all undead beings serving an Litch Overlord. The deep underworld is explored, with human trafficking being a large plot point of the novel. This volume doesn’t shy away from the dark or the gruesome.

The last fifty pages or so of the light novel is where things get really tense. The great fights we’ve seen in previous volumes return, and the pacing increases exponentially. While there is a relatively satisfying conclusion to this volume, there is quite a cliffhanger. The arc is not concluded in this volume, with plenty of room for continuing in The Men of the Kingdom Part 2, the sixth volume in the Overlord series.

As with previous volumes, so-bin’s art is absolutely beautiful. Full page, full color artwork is included at the start to each chapter. The large foldout spread from previous volumes doesn’t seem to be included in volume 5, however. At the very least, my copy doesn’t have one. More character pages are included at the end of the volume, highlighting both newly introduced characters and previously introduced characters who hadn’t yet gotten a stats page of their own.

If you are planning on reading Overlord Vol. 5: The Men of the Kingdom Part 1 I would suggest thinking about getting a copy of Overlord Vol 6 at the same time. While this volume does have a decent conclusion, the arc clearly isn’t over and this volume does end on quite the cliffhanger. Overall, this was another good installment in a great series, and I will definitely be continuing on with Volume 6.